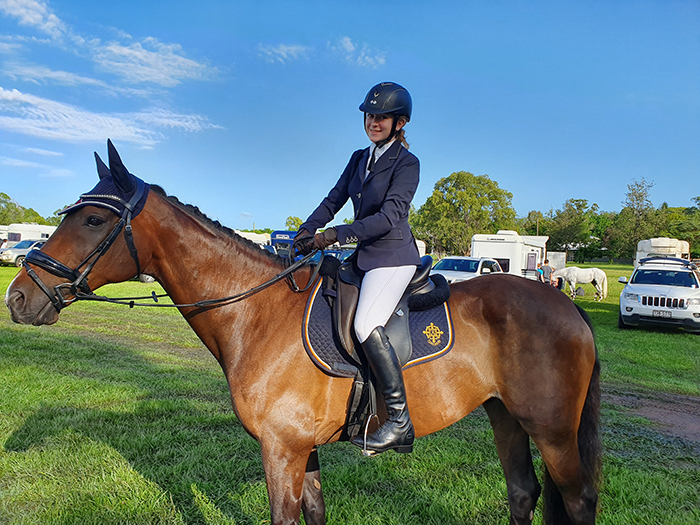 Lily Weaver competed over the weekend at the Stuartholme School IQ Qualifier CT and Showjumping event as part of the MSM Equestrian Team. She competed in the Combined Training (dressage and 1 x round showjumping) component doing the CT95 - SJ @ 95cm. The event was held at Fig Tree Pocket. Lily came away with a PB in the dressage component and a clear round of showjumping finishing her in 4th place overall. This has given her a qualifier for states. Lily competed the following weekend in her first ODE (dressage, showjump, xcountry) for the year. She will be competing at EVA95,  looking for her final qualifier for states in July. Lily also competed over the weekend at the TEG (Tamborine Equestrian Group) ODE in the Junior Eva95 Class. This is an open event as well as an Interschool Qualifier. On Saturday morning Lily got her PB for dressage (2nd week running) followed by a clear SJ round in the afternoon leaving her in 6th place overall after the first two components. Her XC was on Sunday and she had to endure wet and rainy conditions through her warm up. The XC course was 2.5km long with 25 jumps along the way with only 5min 25 sec to complete the course without incurring time penalties. In these slippery conditions Lily managed to produce a beautiful ride clearing all jumps and finishing under time earning her 5th place overall for the event and gaining her final qualifier for State Championships in July.
Contact us: Mt St Michael's College 67 Elimatta Drive, Ashgrove, QLD, 4060 Phone: (07) 3858 4222 Email: spirit@msm.qld.edu.au Website: www.msm.qld.edu.au
Find us on: